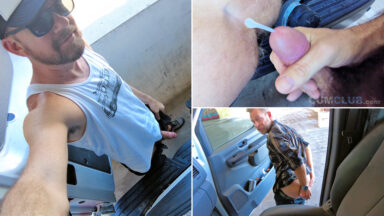 Aaron and Seth find themselves horned up in a public parking garage. This is a super-busy garage, so they knew they’d have to make this a quick one. They find a spot to park and use the rear doors for just a bit of cover. You can clearly see through […]

Maxence Angel is back in another video shot exclusively for CumClub.com. This time Maxence teams up with Benji Vega. These guys had some great chemistry and provide us with a terrific fuck scene. Maxence looking mighty fit and sexy, starts off exploring Benji’s cock and balls. Once Benji got a […]

What CumClub.com members are saying about the FFL series: “Best reality show ever! This is fucking awesome.” “Bravo for this new and bold approach to your work / art. Now I’m even more of a fan.” “I don’t know if I’ve seen anything like this before. It’s like a vlog/porn […]

Hungry for a Breeding

French star, Maxence Angel, wears his producer & performer hat in a scene shot exclusively for CumClub.com. Aaron Slater joins Maxence for their first time on CumClub.com. These guys do not disappoint with their raw fuck video, Hungry for a Breeding. Maxence arrives just as Aaron is starting to prepare […]

Fucked With His Own Load

Aaron French & Seth Chase start out playing with some new toys. After stretching Aaron’s hole wide open, Seth inserts his dick and pounds him nice and hard. They fuck raw in a bunch of different positions. Aaron then turns around and shoots his load onto Seth’s dick. Seth uses […]

Talen is the latest dude wanting to get fucked raw here at CumClub.com. That’s no problem Talen. Seth volunteered to pound this twink’s ass as he’s always eager to shoot his seed into, or onto, a sexy young dude. This one happens to have a tight, pink hole. Talen starts […]

A day trip deep in the mountains results in a raw fuck with a full-load-injection. In a lot of fuck videos, the top pulls out, shoots his wad on the bottom’s hole, then re-inserts his dick. This time Seth has a plan to plant his full load, every drop, deep […]

You’ve seen Seth suck off and swallow Colton’s thick, tasty load. Now it’s time for Seth to plant his seed deep in Colton’s guts! Colton starts off talking about how he was a little nervous for his other shoot as he had never done a video before. Then he talks […]

Seth and Kyle come together for a monumental raw pounding. Seth has already fucked Kyle. Now Seth takes a raw load up his ass for the first time on video. When Seth said he wanted to bottom and take a load on video, we knew that Kyle was the guy […]

Aaron and Seth were out shopping at a downtown pedestrian mall when they hop into a public restroom to take a piss. Just as Seth finishes his pee, some random dude walks in. At first, Seth didn’t think much of it, just another dude using the bathroom. That is until […]

Kyle is a CumClub.com member and has been messaging us saying he’d love to appear in one of our videos taking some loads. We hit it off with Kyle so well that we’ve actually shot several raw-fuck & suck-off videos with him. Look for those soon. In Kyle’s first video, […]